What if Steam had mobile integration?

I was recently browsing through the App Store looking for some AAA titles to play on my phone when I came across XCOM: Enemy Unknown. Now, I already own XCOM on PC, it’s a fantastic game, but starting up my secondary computer just to play one mission is quite cumbersome, which is why I haven’t played it much. (Yes, I know this is a first-world problem, but for the sake of the post, let’s proceed).

That’s why playing XCOM on the iPhone made a lot of sense. On my daily commute I could just start up the game, play a single mission, and put the game away till my next ride. However, I realised that any progress I made on this iOS version of the game would not be synced across to my computer, and I’m not just talking about the save game file here, I’m talking about my achievements, play time, and other stats; ya’ know, things that make Steam so great. So, why doesn’t Steam have a platform for mobile versions of the game that are complete ports? Here’s why they should do it:

I would be more inclined to purchase premium game ports on my phone knowing that my progress can by synchronised across. The reason I haven’t purchased XCOM
or Five Nights at Freddy’s
on iOS is for this very reason. There’s no point completing the game on mobile if I miss out on all of the cool achievements and progress on my Steam account.

Steam benefits a lot by doing this too #

Think about the possibilities here. If Steam could integrate into mobile games, it totally gives them reason to open up a Steam mobile games store. There could be a dedicated section for it on their site pointing out games that have Steam Mobile support.

Publishers could set up game bundles letting you purchase both computer and mobile versions of their games for some special offers. Better yet, it could also give publishers more reason to actually port more AAA titles to mobile.

Heck, Valve could probably set up their own App Store on Android just for games and let you purchase through them directly.

Edit: This came up on a discussion in the Hacker News thread:

What could really knock this one out of the park is In-Home Streaming. Why buy an nVidia Shield and a high-end GTX graphics card when you can stream to the iPad you already have? — quarterto

Great point. Steam could easily pull off what OnLive has tried to do. Of course, there is always the question of how game controls will translate over to a tablet, but bluetooth controllers are not unheard of.

And it won’t be another OpenFeint #

OpenFeint was hugely successful before Apple’s Game Center came and basically took over on iOS, but the reason they couldn’t survive is because there was really no reason to stick with them when you can go native. Furthermore, they definitely didn’t have a community like Steam’s or a company like Valve behind them. EA still persist with Origin in their mobile games today so even more reason for Steam to join in.

Oh, and here’s what I think Steam on Mobile could look like # 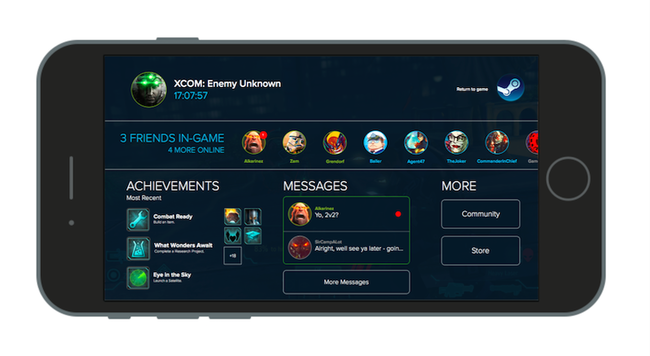 You can check out an animated version here.

Anyway, it was just a thought. #

I felt like blogging about the idea. If you’re not a gamer who uses Steam, this post is pretty irrelevant. However, If you’ve got feedback on the design or want to chat, [feel free to get in touch via email](mailto://ammaar@me.com) or on Twitter (asronline)

P.S. I know I haven’t been blogging for a while, but I’ve just had a busy schedule lately. I’ll be blogging more about products in general, product design, and some of my recent tech conference experiences very soon. Thanks for reading!

Here’s how Facebook Groups could be so much better…

I use Groups on Facebook a lot. They’re a great way of sharing information without having to leave my favourite social network. It’s become increasingly common to have Facebook Groups for things like the course you’re doing at... Continue →