Here’s how Facebook Groups could be so much better…

I use Groups on Facebook a lot. They’re a great way of sharing information without having to leave my favourite social network. It’s become increasingly common to have Facebook Groups for things like the course you’re doing at university, a hobby, clubs, and more. However, if any of these groups are relatively active, keeping a track of the information in them can be a nightmare. For this post, I felt like sharing my thoughts on how Facebook can make Groups even better. There’s incredible potential in Groups and it appears to be one of the under appreciated features as of late. I’ll talk about two types of Groups: the one I use for my Computer Science course at university and a popular group for hackathon attendees called Hackathon Hackers. I’ll discuss features I’d like to see in Groups and why the fact that they don’t exist is an issue.

Let’s start with something basic:

Admin rights for all! #

That sounds scary, right? It’s pretty annoying that Facebook does not allow a second tier of control in Facebook Groups. Making everyone an admin in big community groups like Hackathon Hackers is an issue. Suddenly someone who promises to keep the group clean has decided to change the group’s name, delete a few users they didn’t like, or even delete the group itself! There’s a reason Facebook has different roles on Facebook pages, so why not do the same for Groups?

Allow group admins to set group moderators, people who are allowed to moderate posts, but have a limited number of extra rights in general. Possibly allow admins to even pick and choose what rights each moderator should have.

Yeah, finding posts that are more than 2 weeks old in a group that gets multiple posts a day is incredibly tedious. I can constantly scroll down looking for a post, while my browser starts lagging due to the infinite scroll, and hoping against hope I don’t end up scrolling past it without noticing.

Finding posts should not be this hard and I have a few solutions in mind.

Tag all the posts #

It would be great if you could add tags to posts to file them under specific topics. For example, in my Computer Science group, if someone is talking about the Artificial Intelligence course in their post, they could just drop the AI tag and suddenly all posts about Artificial Intelligence are easily accessible. Here’s what I think it could look like too:

How about an archive? #

Being able to jump back to say, January of last year and seeing what everyone was posting about exams in my Computer Science group could be really helpful. Right now, the only way to do this is to keep scrolling till I get back to that date — yeah, no.

A simple archive that lets you jump to specific years or months could solve that problem easily. Here’s a quick mockup: 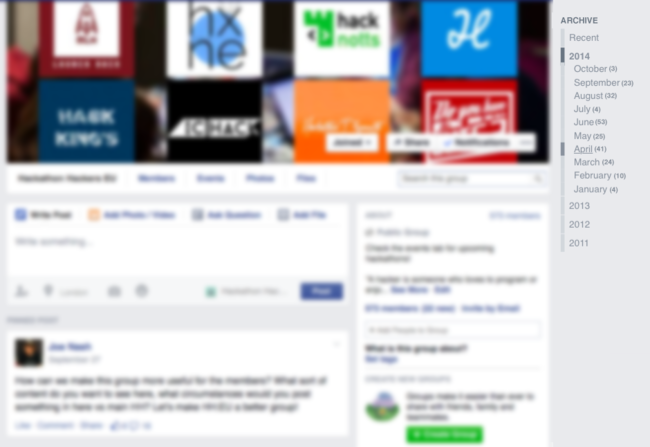 So, there’s this one person in your group who keeps sharing useful information and material, but it’s impossible to find those posts when so many people post right after him/her. What do you do? Infinite scroll of course! — NO. It seems, we’ve now got a good enough reason to just make search on Groups more advanced. Wait, you didn’t know there was search on Groups? You’d actually be surprised how many people fail to notice it.

Anyway, you could add advanced filtering options to search on Groups like:

While we’re at it, how about searching one query through multiple Groups!? #

Here’s a crazy idea. Imagine I’ve got 3 Computer Science groups, one of them shared a link I wanted to catch up on. I could search for what was in the content of that post across all three groups and quickly find the link. Neat.

Multiple groups with the same theme #

So, the group Hackathon Hackers has over 8,000 awesome hackers but they’ve split up the group into multiple “sub-groups” (right now, that means they’ve just created different groups and linked to them, have a look below)

Yikes! That is incredibly tedious, but the need for sub-groups makes sense.

What if I want a Hackathon Hackers group just for posts about hacks I’m working on or one for job opportunities. Now, you could argue that if we’re implementing tags then that should be enough filtering to prevent the need for a second sub-group, however, think about it like this: what if I only care about posts related to job opportunities or what people are building? I wouldn’t want a notification every time someone posts in Hackathon Hackers then, I’d only want to know if someone posts about it in the jobs group.

Here’s another example: I want a general CS group, then I want one for first, second, and third years. It would make a lot more sense to just post general CS related questions in the CS group, questions and content for first years in the first year group. That way, if I truly just care about posts in the third year group, I don’t get notified each time someone from the year below posts unless it’s in the general group. There you go.

Groups could even have its own app, here are some mockups! #

Think about the possibilities here. Just like Chat, Groups are a big part of Facebook. If the above features are all implemented, there’s no reason why Groups can’t have its own standalone app. Here’s how I imagine it:

More where that came from! #

If you’re interested in seeing more mockups, just head over to my Dribbble profile — feedback welcome!

But wait, what about the casual Facebook Groups user? #

That’s totally cool. Consider these “power” features. If you’re a casual user, you may not need tags or an archive or subgroups. Just ignore that they exist. Facebook could even let you turn on all of these extra features in the admin settings to abstract all of these complex features away.

Whoa! If you read through all of that, you’re awesome! Here’s a quick recap of everything discussed:

Groups on Facebook can become a much bigger feature than it already is. There are loads of spin-off sites that are basically Facebook Group clones but for a specific purpose like education, for example. With a few more features, there really will be no big reason why you shouldn’t use Groups for even bigger active communities and it’s a part of Facebook I really want to see develop.

If you’ve got any feedback, just drop me a line via email or catch me on Twitter (@asronline). You can also join the discussion on Hacker News, here.

Also, Facebook, if you’re reading this, please make it happen.

EDIT - 18/11/2014 Facebook just released their app for Groups today! Congrats to the team working on it, thrilled to see it develop, check it out here.

What if Steam had mobile integration?

I was recently browsing through the App Store looking for some AAA titles to play on my phone when I came across XCOM: Enemy Unknown. Now, I already own XCOM on PC, it’s a fantastic game, but starting up my secondary computer just to... Continue →